Where dreams are realised and creations forged and stitched...

The story behind the Studio 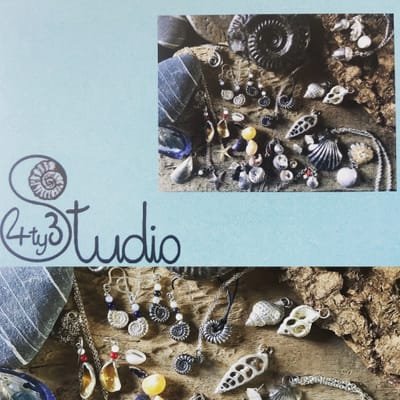 Studio4ty3 was opened officially in September 2020. A haven for creating an increasing range of artwork. A home for my silversmithing tools and also for my sewing machine to name but a few.


Natural objects recreated in silver
My silver pieces began when I couldn't find a realistic ammonite pendant. Having walked on the beach at Charmouth many times, I decided to start with a real ammonite and cast from that. The resulting piece was very successful and was instantly something that I wore all the time. I enjoyed the process so much that I began to look for other ammonites, shells and natural objects that might work well cast in silver.

What started as a hobby quickly became more than that when people started asking where I had bought my jewellery. Once they found out I had made it, they wanted to know if I sold my work and so that's what I started to do.


Pre-loved textiles reimagined
Working with textiles came a a bit of a surprise to me as I didn’t find sewing easy when I was younger. Recycling textiles fits in with wanting to keep old fabrics, often with memories attached to them, in use.

Taking shirts that had belonged to my Dad, and making cushion covers from the scraps, I started thinking about other ways in which similar textiles could be used.

Please leave me a review of the piece that you purchased.
Many thanks.

My favourite piece is my acorn necklace. I wear it almost all the time and love the feel and look of it. The earrings are beautiful also and I have had lots of lovely comments from people when I have been wearing them.

I really love my ammonite studs, they are so detailed and I love knowing that they are made from something so old!

I am really delighted with the silver acorn necklace which I bought for my niece's birthday. It is a very special and original piece and so beautiful. Thank you!

Enjoying my beautiful necklace, it has a lovely vibe as well as looking great. I've had several admiring comments already.

One of my favourite pieces by Kathryn. I'm really enjoying wearing this beautiful one at the moment.

The sycamore seed pendant is just exquisite. I was amazed at the complicated and lengthy process that went into making it, and it really is so beautiful. The fact that I know where the real seed was found makes it even more special to me. Beautiful work from a solo artist (and not a multi-national faceless corporation). Thank you so much!

Beautifully detailed, amazingly tactile, GORGEOUS acorn pendant and earrings. I will definitely recommend you and will be a returning customer.

I've purchased two pendants and a pair of beautiful earrings from studio-43. Kathryn's creations are not only original but beautifully made with a great attention to details. The pendants are sturdy and after five months show absolutely no signs of wear and tear. The pieces come beautifully wrapped too. I highly recommend and am looking forward to seeing more designs. Xx

I bought an acorn and I am delighted, it's even better than the photo. Very fast delivery, highly recommended.

Lots of talented artisans to browse and buy from.